Were Adam and Eve kicked outta the garden for smoking weed?
The BEST video on biblical potheads, a real must-see.
Kaneh Bosm: The Hidden Story of Cannabis in the Old Testament
This sacred plant has been used for at least 4,755 years to relieve everything from pain to bad moods. The Chinese have been using cannabis plants since at least 2737 BC, when Emperor Shen Nung wrote that it relieved his pain and dietary issues. Anthropologists found cannabis pollen in the tomb of Ramses II, who died in 1213 BC. In India the plant is considered sacred and has been used in rituals, spiritual ceremonies, and health practices since 1400 BC.
The Biblical Tree of Life
"Cannabis" in Latin, and “kanah bosm” in the old Hebrew scrolls, quite literally is the Biblical Tree of Life. Medicinal oil, for the Prince of Peace. A formula from the Biblical era has been rediscovered. It specifies a strong dose of oil from kanah bosom, ‘the fragrant cane’ of a dozen uses: ink, paper, rope, nutrition. It was clothing on their backs and incense in their temples. And a ‘skinful’ of medicinal oil could certainly calm one’s nerves, imparting a sense of benevolence and connection with all living things.
No wonder that the ‘anointed one’ could gain a spark, an insight, a sense of the divine, and the confidence to convey those feelings to friends and neighbors!
The holy anointing healing recipe from Exodus 30:22-25 is as follows:
Myrhh (mar deror) 500 shekels (about 6kg)
Sweet cinnamon (kinnemon besem = sweet cinnamon) 250 shekels (about 3 kg)
Kaneh bosem ("aromatic cane") 250 shekels (about 3kg)
Cassia (kiddah) 500 shekels (about 6kg)
Olive oil (shemen zayit) 1 hin (about 5 quarts)
(Note the linguistic similarity between besem, meaning sweet, and bosm, meaning aromatic).
Now, Jeff @ TheraPure reckons that Jesus (Hay-seus) was not strung up because of his political/religical beliefs, but because he was bouncin' around with his stoner pals healing the sick with kaneh bosm. Big time crime even 2000 years ago.
The Anointed One: Did Jesus Perform His Miracles with Cannabis Oil?
Following the recipe for holy anointing oil found in the Old Testament (Exodus 30: 22-23), this healer of local renown would infuse nine pounds of a plant known in Aramaic as kaneh-bosm (fragrant cane) into about six quarts of olive oil, along with essential extracts of myrrh, cinnamon, and cassia. He would then apply this unguent concoction topically to the infirm, allowing it to absorb transdermally.
The psychoactive effects of such a solution, even when applied topically, seem likely.
Jesus was a stoner.
What has 7 leaves with serrated edges?
Hmmm.. appears to have something to do with Ailments and Misery.

Check it out.. dudes standing behind Jesus are really jonesin' out,
they're all like, "Yo, Hayseus, break loose with the kind buds, man!"
"Yeah, Brohîm, don't waste it on them, those guys're toast!"
"Don't bogart that joint, Jesus!!" ....JC holdin' on to that big ol' spliff,
dusting 'em out with CBD isolate crystals.

Interesting tidbit about cannabis, see page 414 of Zecharia Sitchin's "The 12th Planet" regarding: "..wheat, barley, hemp and Anshan the long-haired cattle were lowered to earth from Nibiru."

Zecharia Sitchin was an Azerbaijani-born American author of books proposing an explanation for human origins involving ancient astronauts. Sitchin attributes the creation of the ancient Sumerian culture to the Anunnaki, which he states was a race of extraterrestrials from a planet beyond Neptune called Nibiru. He believed this hypothetical planet of Nibiru to be in an elongated, elliptical orbit in the Earth's own Solar System, asserting that Sumerian mythology reflects this view.

It is this website author's view that Ancient Aliens® would never have had such content for their tv program, were it not for Sitchin's invaluable contribution to real world history.

Guy on the left is sayin' like "This bomb shit here!?" Guy on the right is like pointing up to the Winged Disk, nodding.. "Word! From Nibiru, Brohîm!" 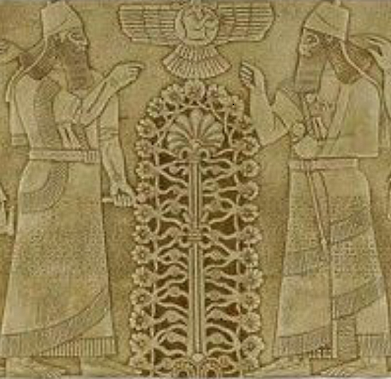 More Sumerian Weed Images including Clouds and Clouds of Smoke 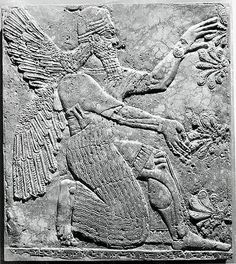 (A lot of bible mention was given to the 'reed stylus'.
jT reckons they wuz just, y'know.. prehistoric blunts.
Y'know.. or yer first vape pens).